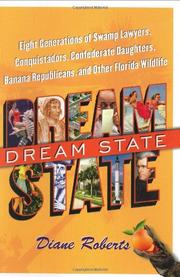 The author tracks her Florida family branches back some eight generations as evidence that the state’s history is uniquely and often scandalously strange.

Roberts (English/Univ. of Alabama) roamed Tallahassee as a journalist (St. Petersburg Times, The New Republic, etc.) during the Election 2000 debacle. Fidel Castro, she recalls, offered to send “democracy advisers,” a wisecrack that makes it clear her sympathies did not lie (as did those of some of her relatives) with elections supervisor Katharine Harris, whom the author characterizes as duping the press into seeing her as an airhead handmaiden of the Bush dynasty while coolly administering whatever selective disenfranchisement it would take to get the job done. This sardonic account of the post-election scramble serves as preamble to Roberts’s engrossing portrayal of her native land as both charmed and cursed from the day Ponce de Leon first stumbled ashore to sip from the legendary fountain only to receive an ultimately fatal wound. Florida, she deftly argues, has somehow become everybody’s ultimate “second chance”—mostly in the form of perennially virgin real estate lying prostrate for exploitation. Roberts cites, for example, the legislature’s 1924 prohibition of both income and inheritance taxes, officially inviting the lustful rich to overrun the adventurous poor, who had in their own heyday ethnically cleansed the original Seminole inhabitants. Edgy, sarcastic wit peppers a historical narrative dovetailed, to the occasional point of slipped focus, with ancestral ups and downs. Yet Roberts doesn’t spare her own kin when it comes to a good story: hoop-skirted debutantes as poseurs of the Old Confederacy, KKK yips, moonshiners, and power-brokers on the take dot the assembled genealogical roster. State legislator Luther Tucker, for instance, is tabbed apocryphally as someone who dialed up a hooker in the 1950s from a Tallahassee hotel room to find, on her arrival, that they were related.

A raucous but also sensitive and insightful view of why the Sunshine State really is different.