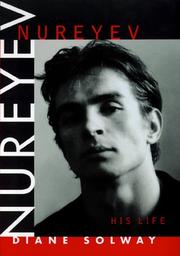 Journalist Solway (A Dance Against Time, 1994) performs a commendable research mission on behalf of the glamorous, troublesome late ballet star Rudolf Nureyev (1938—93). Though as narrator she’s almost too tenaciously conscientious to do justice to his bottomless flamboyance, the dancer’s less savory side (gay hustlers at midnight; jeweled jockstraps) perhaps speaks for itself. In some ways, the most interesting part of the book concerns Nureyev’s life as a child. Born aboard a Trans-Siberian Express train, he grew up a Tatar, descended from Genghis Khan, in the Bashkir Autonomous Republic, with interruptions and stays in Moscow. War and penury beset his Muslim family: “Potatoes were the only staple.” The deprivations of his early life, and Nureyev’s difficult relationship with his taciturn and tyrannical father, may have bred his successive rebellions. Ballet was the most telling of these. Though he started training late and in some respects never could compensate in his technique for the lost time, Nureyev’s determination and remarkably feral allure onstage carried him through adversity at the Leningrad Ballet School and the Kirov Ballet to his celebrated 1961 defection to the West and subsequent decades of theatrical antiheroism. Not for nothing was The Catcher in the Rye one of his favorite books; “Rudimania” saluted a Holdenesque iconoclast in tights. Solway is dogged and diplomatic in pursuit of him. Though her appraisals of his dancing lack the flourish and authority of an insider critic, she passes equably through the turbulent stages of Nureyev’s career, offering apt secondary portraits of Margot Fonteyn, Erik Bruhn, and others. She is careful never to emphasize the tawdry or pathetic in Nureyev; he emerges as a desperate character who mistrusted banks and every other standard authority, who worked himself into unique extremes of exhaustion, and who failed to win the only real love of his life (Bruhn). So despite a few bandied clichÇs, Solway holds the stage. The sound and the fury, distilled. (32 pages b&w photos, not seen)