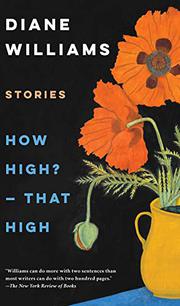 HOW HIGH? THAT HIGH

Williams is a magician of the miniature.

Her 10th book of short fiction features 34 stories, all in the span of 128 pages. But don’t let their diminutive stature fool you: These pieces pack a punch. Brief, elliptical, steeped in longing—or is that lust?—they offer slices of life that rely on interior more than exterior details, which is to say they are small road maps of the soul. Williams sets the stage in “Upper Loop,” which opens the collection. “I am trying to think if there’s any reason for having fun anymore on any level?” she (or her anonymous narrator) wonders. “I know that that’s not the kind of thing people usually talk about.” That pair of sentences might stand as a thesis statement for the entire book. Williams’ characters—if we can call them that; many are rumors of characters, impressions—are aging, lost, and often lonely, trying to come to grips with where they are. “Now her heart gets so much assistance from a pacemaker,” one observes of a neighbor, “that sometimes I think she is unable to die.” And yet, rather than frustrate us, the elusiveness only draws us in. “She’ll Love Me for It” offers a vivid snapshot of a grieving woman before raising this surprising question: “Where is her capacity for being a sly tease? for being playful?” In less than two pages, the story gives us layers, multitudes. Something similar might be said of all the pieces here, which are rigorous in both language and emotion, using nuance and inference to explore the implications, the contradictions, that people rarely share aloud. “On her stovetop, for example,” Williams writes in the magnificent “What Is Given With Pleasure and Received With Admiration?” “an iron pot she owns has been scoured and scooped out even more than she has.”

Williams’ small gems are as dense and beautiful as diamonds, compressed from the carbon of daily life.