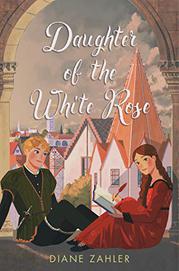 DAUGHTER OF THE WHITE ROSE

The life of a butcher’s daughter is intertwined with those of the princes in the Tower of London.

Born during the tumultuous years of England’s Wars of the Roses, Nell, fictional daughter of John Gould, an actual historical royal butcher, grows up as a companion and dear friend to Prince Edward. Ned is the firstborn son of King Edward IV, but his uncle is Richard, Duke of Gloucester, portrayed here as grim and suspicious. When Ned is sent to the Welsh Marches to learn kingship, he writes to Nell in Latin and awakens in her a thirst for reading and writing. In short order, the king dies, Richard seizes the throne, and Nell and her little brother are given permission to visit Ned and his brother, who are being held in the Tower of London. The visit becomes a sojourn, and Nell acknowledges her love for Ned. Escaping to a nunnery after the royal murders, Nell finds sanctuary, witnesses the death of Richard in Bosworth Field, and finally understands that she can have a fulfilling, independent life. Characters both real and imaginary inhabit this multilayered, dramatic interpretation of royal intrigue. Nell has a keen eye for royal household details, adding depth and warmth to the tale. The afterword and timeline are essential reading for a full understanding of the story.

A quick-paced foray into English history and one girl’s self-discovery.