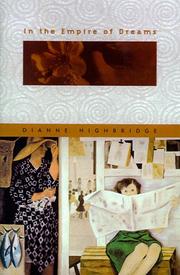 IN THE EMPIRE OF DREAMS

Drawing on her own experiences in Tokyo—having taught English to Japanese adults and being married to a Japanese man—Highbridge follows her powerful debut (A Much Younger Man, 1998) with this lesser but still compelling series of interlocking vignettes about three Western women who have come to Tokyo to pursue academic research. When Liz arrives from Australia, thoroughly rattled by culture shock and terrified of earthquakes, she finds her transition eased by Cathy and Elaine, Americans who are already ensconced in the expat community and absorbed in scholarly and other pursuits. Teaching English, the expats’ bread-and-butter, is also the foundation of their social network, bringing Cathy into brief contact with the desperately unhappy Claudine, an American company wife whose fling in the love hotel, The Empire of Dreams, fails to fulfill her; and drawing Elaine into a more substantial connection with a gay American, Larry, who’s deeply hurt when a longtime Japanese friend gives him the brush-off in order to steel herself for an arranged marriage. Liz enters this world happily, even when it means encountering the frosty Gwyneth, her Japanese boyfriend’s British teacher, from whom he seeks advice on how to woo Liz properly. As years pass, however, the ties that once bound and the studies that once consumed the three are challenged by competing passions; ultimately, only Elaine, a historian of Buddhism, remains true to her scholarly calling. Enchantingly detailed, with insightfully developed characters and a number of remarkably imagined scenes, Highbridge’s tale still needs a stronger framework to keep its many fine moments from seeming as fragmented as they do.