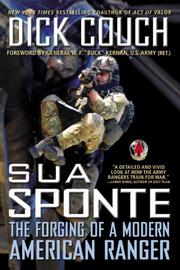 The Forging of a Modern American Ranger

A former Navy SEAL takes an inside look at how the Army selects and trains its elite warriors.

Among the American military’s special operations forces none has an older or more distinguished history than the Army Rangers. Couch (Chosen Soldier: The Making of a Special Forces Warrior, 2007, etc.) takes us briefly through these glittering annals, but quickly focuses on the unit’s modern incarnation, the 75th Ranger Regiment, and its preparation of soldiers for their direct-action mission. A light infantry, mobile assault force that typically fights at night, the rapidly deployed Rangers conduct raids designed to kill or capture the enemy, to disrupt his operations, and to seize objectives like airports or embassies. To accomplish this mission, Ranger candidates, recruited from regular Army volunteers, undergo arduous training and merciless evaluation, all levels of which Couch examines. Granted unprecedented access, Couch follows a Ranger class through to its departure for the battlefield. He liberally sprinkles the narrative with interviews of the candidates and their trainers, paying due attention to the specific skills taught—shooting, breaching, mobility, hand-to-hand fighting, fast-roping, etc.—but focusing even more on a complete picture of the unique Ranger culture. The requisite physical fitness, intelligence, mental toughness, ethical maturity, patriotism and cultural suitability of each Ranger are always subject to proof in a regiment where you “have to earn your Scroll every day.” The peer-review process will strike civilians as brutal, but the Rangers’ candid assessment of their fellows, Couch makes clear, is crucial when lives depend on the creativity, cooperation, stability and reliability of each soldier.

An admiring, inspiring account of how the Army shapes and sharpens the tip of its spear.