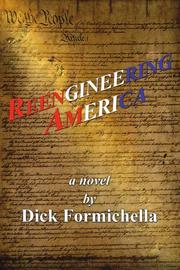 An ambitious entrepreneur advocates a bloodless revolution to modernize the United States Constitution in this improbable but heartfelt political fantasy.

The idealistic plot makes The West Wing look like gritty realism, but Formichella executes the narrative with panache. John Payton, a software billionaire and steadfast do-gooder, is obsessed with giving the American people the chance to remake the Constitution: â€œ â€˜The Constitution will always have great symbolic and patriotic significance to us, but we need to develop a modern version to help guide us through the challenges we’ll be facing in the next century.’ ” Convinced that rapid advancements in technology have made America’s representational form of government obsolete, Payton sets out to convince the government to pass a constitutional amendment authorizing a second Constitutional Convention to modernize the foundations of American democracy. Bolstered by a rogue senator and legal scholars, Payton models his plan on the Civil Rights Movement but with a broader agenda, and he also confronts essential logistical questions with an educated understanding of both technology and governmental structure. Formichella builds suspense and intrigue through Payton’s battles with the understandably wary intelligence community and an unhinged journalist, but these elements are ultimately tangential to the central argument. While the protagonists have an obvious political leaning and the amendment’s acceptance is somewhat naÃ¯ve, the real success here is Formichella’s vigorous examination of modern democracy and the mechanisms by which it succeeds or fails.

An arcane but intellectually substantial debate on the validity of the American way.