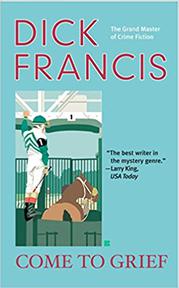 Big news for Francis fans: He's broken his rule against recycling heroes and brought back one-handed p.i. Sid Halley (Odds, Against, 1966; Whip Hand, 1980) to investigate a series of mutilations of two-year-old ponies. Sid naturally feels close to the equine victims, who've had their off-forefeet amputated; but he feels even more unnervingly close to the suspect he soon uncovers—his old friend and former racing competitor Ellis Quint, now turned immensely popular TV entertainer. Despite the mountain of evidence that leads to Ellis's arrest, Sid, gagged by England's sub judice role from discussing the case until the trial begins, falls victim himself to a campaign of smears and revenge so vicious—the weekly paper he's been working with suddenly turns on him in savage columns defending Ellis, and Ellis's father attacks him with an iron bar—that there must be somebody big and well-organized behind the vendetta against him. A world away from the racetracks he used to call home—the closest we get to a race is Sid's laconic comment, "I watched the Derby with inattention. An outsider won"—Sid pokes around after that somebody, risking not only innuendo and hatred, but the loss of his remaining hand. Francis's 34th novel is grand entertainment with a bittersweet edge his fans haven't seen since his sorely missed hero's last appearance. Welcome back, Sid.