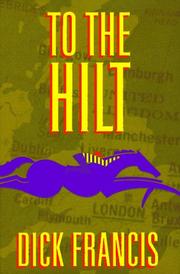 Horses finish well back in the field in Francis's dependable 36th thriller. Like the heroes of the first 35, Alexander Kinloch is a loner—a painter who lives without mod. cons. in the Scottish Highlands—pulled reluctantly into action by a summons from one of the few people who knows he's alive. His unemotional mother cables him to let him know that his stepfather, Sir Ivan Westering, has been stricken by a heart attack. Even before he can pack for London, Al is attacked by four thugs who demand to know where it is (they don't say what it is, and Al doesn't ask), leave him barely alive when he won't talk, and make him much more interested in Ivan's messy affairs. An embezzling finance director has toppled Ivan's brewery into bankruptcy, and Ivan's rapacious daughter Patsy Benchmark is hot to seize his assets, including Golden Malt, a steeplechase hopeful for the brewery's King Alfred Gold Cup, and an actual gold cup linked to Alfred the Great, and only Al, who knows precious little about either horses or antiquities, can help. There'll be insolvency consultants to meet, creditors to persuade, an elderly nationalistic evaluator to outwit (she wants not the gold cup but the 1740 hilt from Prince Charles's ceremonial sword, a gift from Charles to Al's family, returned by his titled uncle to Scotland), Patsy and her unsavory husband to foil, Al's long-estranged wife to come to terms with, and an unexpected manslaughter to solve. Al pulls off these commissions with panache, and with the help of an uncommonly versatile private eye. Far from Francis's best work (Come to Grief, 1995, etc.), but among his most generously plotted books, by turns unexpectedly humorous and moving in its rooting of stoicism in personal loyalty. It's a fine moral code for a jockey, but Al shows that you don't have to be a jockey to be true to your friends.