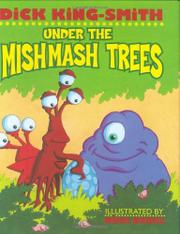 UNDER THE MISHMASH TREES

Another short, cozy animal (to use the term loosely) tale from the master of same. Here a polite, peaceable “slobbadunk” named Tumblerum Wollycobble—portrayed in Bruel’s many scenes and spots as a purple glob with blubbery lips and one big eye—forms a long association with married couple Og and Ut and their offspring, who are many-legged “gombrizils.” So grateful is Tum after Ut (the wife and, of course, the brains of the couple) cures its rumbustious digestion by adding meat (in the form of fat “swoots”) to its vegetarian diet and performs other favors, that it volunteers to tend both her own egg and the two that her daughter Okay lays years afterward. That’s about it for plot, but the names are so silly, and Bruel does such a masterful job of depicting the blobby cast (in spots the gombrizils look like proto-Simpsons) that early-reader graduates can’t help but break out in giggles. (Fantasy. 7-9)