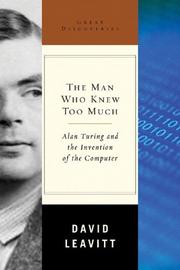 THE MAN WHO KNEW TOO MUCH

Alan Turing and the Invention of the Computer
by David Leavitt
BUY NOW FROM
AMAZON
BARNES & NOBLE
GET WEEKLY BOOK RECOMMENDATIONS:

Given the example of the great British mathematician and inventor Alan Turing, it’s ironic, writes novelist Leavitt (The Body of Jonah Boyd, 2004, etc.), that the study of mathematics was once thought to cure homosexuality.

Turing expanded upon important ideas of how thinking happens and how machines could be taught to think, and he had a certain inclination toward machine-like literalness himself. A brilliant man who never quite shone, he was always off in the corner, becoming increasingly eccentric and spectacularly unhygienic as he grew older, oblivious to the norms by which others around him lived. Still, Turing found himself at the very heart of the British effort during WWII to crack the German Enigma code. He labored endlessly to decrypt enemy communications, making important discoveries about machine logic in the process. Many of Turing’s contributions to mathematics and nascent computer science date to his years doing top-secret work at Bletchley Park. He might have gone on to greater things had he not been hauled up on the postwar morals charge of “gross indecency with another male: the same crime of which Oscar Wilde had been convicted, and for which he had been sent down, more than fifty years before.” No jail for Turing, though: He instead ate a cyanide-laced apple in homage to a favorite movie, Snow White and the Seven Dwarfs, a gay martyr who had written of himself, sadly: “Turing believes machines think / Turing lies with men / Therefore machines do not think.”

Competent and always interesting, if a little cursory on some of the heavier mathematics.

THE BODY OF JONAH BOYD
by David Leavitt
Fiction

IN MAREMMA
by David Leavitt
Fiction

FALL OF MAN IN WILMSLOW
by David Lagercrantz
Nonfiction