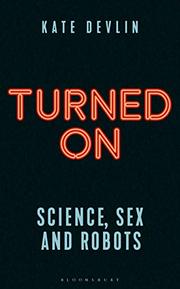 A curiously fascinating study on the evolution of personal-use robotics in contemporary society.

A researcher in human-computer interactions, Devlin’s (Computing/Goldsmiths, Univ. of London) interest in sex robots began after socially interacting with the innovative wizards behind their automation. She taps into the many conversations she’s had with fellow “robosexologists” and confirms that robotic intelligence is increasingly becoming “integrated into our everyday lives.” The author discusses the popularity of virtual assistants like Alexa and Siri and humorously surmises that for every command to play music, there is someone barking sexually lewd orders just to see what happens. “If it exists,” she writes, “people will try to corrupt it.” Though the closest commercially available product to real-life sex robots is the RealDoll, Devlin believes the future possibilities are as endless as the ethical complications they inspire. Meanwhile, readers will enjoy the history of artificial sexual stimulation, courtesy of the author’s brisk histories of early string and lever versions of robotic mechanisms seen in ancient Rome and Egypt, the origins of the female vibrator, and a humanoid prototype named Pepper among other thinking and teaching machines made for human companionship and development. Chronicling her interviews with a generous sampling of sex experts, Devlin also explores the titillating world of “teledildonics” (internet-synced smart sex toys) and techno-enhanced pleasure bots, and she works to debunk the industry’s myths and correct misconceptions. Throughout, she presents her material with intelligence, a clever wit, and a charming sense of humor. Her thoughts on traditional attitudes toward sex, emotional attachment, and misappropriation add clarity and perspective to a narrative that reads as more than a simple discourse on bridging robotic automation and artificial intelligence with adult novelty. Her visit to a sex doll factory provides a future-forward glance at the race to capitalize on this fascinating (and lucrative) niche market, which technologically and erotically bridges the gap between the artificial and the biological.

An immensely absorbing and provocative book on the past, present, and future of robosexuality.