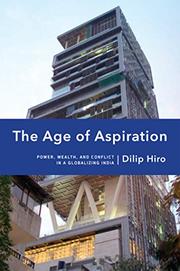 THE AGE OF ASPIRATION

An insider’s economic report on the perils and scandals of India’s precipitous drive into a market economy over the last decades.

Since 1991, India’s New Industrial Policy—reducing the “license raj” and encouraging private companies in banking, insurance, telecommunications, and air travel—has enriched many and impoverished many in the world’s largest democracy. London-based author Hiro (A Comprehensive Dictionary of the Middle East, 2013, etc.) looks at the impact of globalization both on villagers and on the institutions involved, thus encompassing both the small and big pictures. Narendra Modi, the chief minister of the opposition Bharatiya Janata Party, has led with the neoliberal pro-investment “Gujarat Model,” since 2001, despite being darkly tarnished by the spate of anti-Muslim violence that broke out in Godhra, North Gujarat, in 2002. Running on the slogan “India Shining,” the BJP underscored a new era of “illicit gains” by politicians and the “exponential growth in sleaze, which was related to the acceleration in deregulation and privatization.” Recently rehabilitated, Modi trounced the traditional Nehru-Gandhi dynasty of the Congress Party in 2014, ensuring a continued policy of swadeshi, or self-reliance, regarding the global economy, becoming the darling of the United States and feeding the deep chasm between the haves and have-nots. Hiro pointedly explores the miraculous growth of the satellite town of Gurgaon—at least in terms of land and property values, as it still lacks in basic public services and infrastructure (the sad but all-too-familiar “Dickensian underbelly” that is the byproduct of globalization). In subsequent chapters, Hiro examines India’s need for massive loans from Western banks, encapsulated in the Tata Group story; the incredibly powerful Indian diaspora in Silicon Valley; the “scandalous neglect of India’s agriculture”; the rise of slums; and the continued role of the Maoist Naxalites and the grass-roots efforts to combat corruption.

As comprehensive and knowledgeable as Hiro’s earlier Inside India Today (1977; reissued 2013).