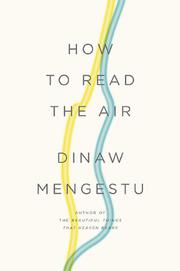 HOW TO READ THE AIR

A sometimes somber, always searching novel of love, loss and the immigrant experience by Ethiopia-born writer Mengestu (The Beautiful Things that Heaven Bears, 2006).

Mariam and Yosef are miserable, and for several reasons, not least the fact that husband and wife do not really know each other. Torn from their homeland by civil war, they have been plopped down on the flats of Illinois, settled in the white-bread city of Peoria and left to fend for themselves. Yosef, though, has ambition, and in time he puts himself behind the wheel of a weathered Monte Carlo—“a shabbier shade of red than the one she imagined”—and points its nose toward a destination, Nashville, since he loves nothing more than country music. It is not the honeymoon that Mariam, separated from Yosef for years, has dreamed of, and indeed, though the distance from Peoria to Nashville is less than 500 miles, it turns into something quite spectacularly ugly. Years later, their son, Jonas Woldemariam, is grappling with reality and identity. Smart and literate, he’s living in New York City, teaching English at a fancy prep school while provoking wonder that he’s so well-spoken and up on things American. Of course, he is American, thanks to a life in Peoria; when Jonas tells an interviewer of that fact, Mengestu writes, with gentle but pointed humor, “I could see him wondering if it was possible that there was more than one Peoria in this world, another situated perhaps thousands of miles away from the one he had heard of in the Midwest and therefore completely off his radar.” As if by way of proof, Jonas has a suitable roster of American neuroses and problems, including a marriage that seems to be disintegrating with each day. And what better to speed that collapse than to try to re-create his parents’ fateful journey, tragedy and all?

Elegant, confident prose brings this tale to life, and though the trope of the road as a journey to self-understanding is a very old one, Mengestu gives it a fresh reading.