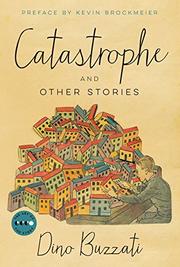 Buzzati (1906-1972) is notorious for his often irreverent short stories, in which characters are revealed like scattered thunderstorms and plots remain unfinished or end abruptly. In Landry’s translation, the essence of Italian surrealism and futurism seeps through every word. An array of characters struggle with existential questions; in the title story, for example, a passenger on a speeding train notices that many of the people he sees through the window seem to be alarmed about something. Then the other passengers pick up on the feeling, but the narrator says: “Like myself, the others were uncertain as to whether the alarm was real or whether it was just a mad idea, a hallucination, one of those absurd thoughts that tend to force themselves upon the tired traveler.” Here, as in other stories in the collection, the character wonders what is real and what is imagined, and Buzzati often plays with this idea of narrative distortion. In “Seven Floors,” a man is taken to a hospital which sorts its patients according to their proximity to death; the closer patients are to the ground floor, the more likely it is that they will die. However, as the story progresses it begins to seem that the floor patients are sent to is based less on medical fact than on a story physicians tell them. Another tale, “The Opening of the Road,” features a character slowly disappearing in the great expanse of a seemingly endless road. This is how Buzzati asks the bigger questions: where are we heading? What is real? And does it really matter?

An evocative collection that might pull the rug from under your feet.