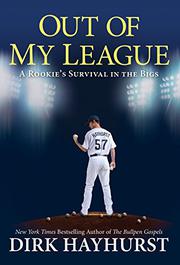 OUT OF MY LEAGUE

The journeyman pitcher/author of The Bullpen Gospels: Major League Dreams of a Minor League Veteran (2010) returns with an account of his struggles to reach and succeed in the Major Leagues—and to find true love.

Hayhurst declares in an author’s note that he’s not interested in writing about “dirty laundry,” but there’s plenty of it on display. He offers grim portrayals of his father, mother and brother, as well as a dark portrait of a fellow minor-league pitcher he calls “Dallas,” who is, in a word, an asshole. Other characters also appear with various warts and imperfections—managers, pitching coaches, veterans who love to haze and others. About the only person who comes off consistently well is the author’s fiancée, Bonnie, whom he marries near the end. Hayhurst occasionally says some bad things and has a few locker-room tantrums, but for the most part he’s the Good Guy on a Quest. Early on he indicates his strong religious beliefs, but they don’t appear much thereafter—oddly, not even during the painful period when he first pitched for the Padres, couldn’t find the plate and lost his confidence. The author also makes an enormous demand on reader credulity when he reports everything in pages of verbatim dialogue with characters speaking in full, well-organized paragraphs, even when they’re outraged. And the chapters end with something snappy, as if Neil Simon were whispering suggestions for curtain lines in their ears. Overall, though, Hayhurst creates forward momentum. Despite our reservations about the narrative, we want him to succeed on the mound, to marry well and to live happily ever after.