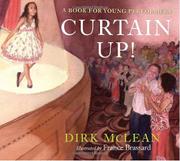 A Book for Young Performers

In a generic but encouraging way, McLean and Brassard take an aspiring (fictional) child actor named Amaya through typical stages from early auditions and rehearsals for a plainly low-budget professional stage production to Opening Night and subsequent rave reviews. The painted compositions are sometimes static, and the multicultural cast and crew are often posed not making eye contact with anyone, but the illustrator gives Amaya, who looks biracial, distinctive features and an appropriately big personality. Also, though the production develops with unrealistic smoothness, McLean, an experienced actor, does tuck a case of stage fright and a few tricks for memorizing lines and the like into his brief, upbeat narrative. Theatrical jargon (feeding, as in a line; dry) is indicated in italics, and a “Cast of Characters” at the beginning introduces such specialized figures as dramaturges, lighting designers and producers. Good fodder for dreamers; serious young thespians will benefit from the more specific and practical likes of Lise Friedman’s Break a Leg! The Kids’ Book of Acting and Stagecraft (2002) or Thomas Schumacher and Jeff Kurtti’s How Does the Show Go On (2007). (Picture book. 6-8)