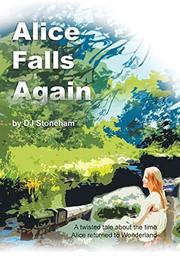 A day before she’s off to college, Alice revisits Wonderland, where she unravels dark secrets in this spin on the Lewis Carroll classic.

As the story opens, Alice feels down because she must leave the “innocence of childhood” for college in London. However, her thoughts are disrupted when she spots a tiny train floating on a nearby river. She soon finds herself shrunken down and pulled onto the train, where she eventually falls over a waterfall (cleverly dubbed “Alice Falls”). Lost in a forest, she realizes that she’s back in Wonderland. Now older and wiser, Alice discovers newfound horrors in this world, including elder abuse, poverty, and government corruption. As she tries to make her way back home, she repeatedly hears about a Mayor Jackson MacDonald, who could be the cause of all these problems; she fears that he’s somehow connected to a monster called a Jabberwocky (another Carroll allusion). Soon, Alice realizes that she might be the key to saving Wonderland from its dystopian state. Debut author Stoneham does a stellar job of re-creating Carroll’s beloved world while also adding his own twists. Familiar characters return or are referenced—most notably, the Cheshire Cat; however, Stoneham’s new players feel just as creative and nonsensical. There’s Jack Door (a play on “jackdaw”), a half-bird boy who briefly acts as Alice’s love interest; and Mary (nicknamed “Bow Peep”), a Janus-faced girl who has an unsettling presence, and these two characters help differentiate Stoneham’s darker world from Carroll’s. The prose style pays tribute to the original’s in the best way possible, as Stoneham incorporates many silly puns, riddles, and nursery rhymes that truly capture the spirit of Carroll’s writing. For example, Alice communicates with the Cheshire Cat via a mobile telephone—literally a phone with arms and legs. With these kinds of jokes, Stoneham’s wit and cleverness tie the novel together.

A brilliant and amusing reinvention.