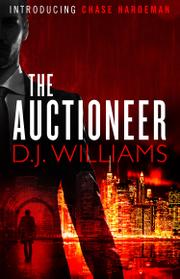 A thriller that moves between Los Angeles luxury and war in the Middle East.

Williams’ (Waking Lazarus, 2016, etc.) novel opens with a rush as antiques auction-house owner and former presidential candidate Michael Hardeman frantically, and ultimately unsuccessfully, struggles to stop his Gulfstream jet from crashing into the Mojave Desert. Simultaneously, federal agents raid Hollywood, California–based Hardeman Auctions, seizing boxes of documents that might reveal a money-laundering scheme as well as other illegalities. Now that 24-year-old Chase Hardeman’s father is dead, he must deal with this investigation into the family business—an operation that pulls in hundreds of millions annually from a wealthy, A-list clientele. Helping Chase to get through these dark days are tech genius and billionaire Randall Collinsworth, whom he calls “Uncle Randy” although they’re not related; Chase’s girlfriend, Laney, who has “gunmetal blue eyes”;his best friend and fellow former soldier, Dax; and his ex-lover Elena Vihkrov, a Russian beauty. Both the crash and the raid have ties to Chase and Dax’s past activities in Mosul, where they purchased stolen antiquities from terrorist leader Abu Haji Fatima—“spoils of war” that eventually ended up at Hardeman Auctions. However, betrayal soon erodes Chase’s support system, and his life becomes as turbulent as his father’s doomed flight. Fatima’s right-hand man, Akram Kasim, and his crew pursue Chase in a nightclub, and although he escapes the venue, a bloodbath soon ensues. Williams delivers an exciting, well-executed thriller. The major characters occupy a grey area between good and bad; even Chase admits that he and his dad were mixed up with the wrong people: “I was no Boy Scout. Sins of a father and son—committed far more often than we ever admitted,” he reveals. The danger is palpable, and women get meaty roles as agents, terrorists, lovers, and combinations of the three. Conversations seem realistic, such as when Elena softly begs Chase to stay the night; after he says that he can’t, Elena smiles coyly and says, “She must be special.” If only Dax would call Chase “bro” slightly less often, the book would be near-perfect.

A highly recommended read that will make readers hope for a sequel.