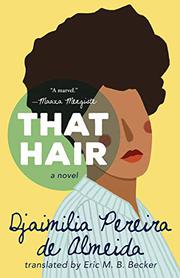 A half-Portuguese, half-Angolan woman uses her hair to interrogate her position between two cultures.

The hair salons in Lisbon don’t know quite what to make of Mila, who moved at 3 years old from Luanda, the capital of Angola, to Portugal and whose hair is a “rebellious mane.” She makes demoralizing visit after demoralizing visit to these salons, where her hair is “pulled…this way and that,” subjected to treatments “whose abrasive chemicals require the use of latex gloves,” or worked into weaves at “a breakneck speed over four hours” (only to come undone soon after). But in this essayistic novel, Almeida's first to be translated into English, Mila’s hair isn’t simply a matter of personal anguish. “The truth is that the story of my curly hair intersects with the story of at least two countries and, by extension, the underlying story of the relations among several continents: a geopolitics.” Indeed, interwoven seamlessly throughout are stories and memories of her family: Her Angolan grandfather’s life as a nursing student in Luanda, the smell of her Portuguese grandmother Lúcia’s hair—“Feno de Portugal soap, tobacco, and oiliness”—as a young Mila combs it, her long strolls through Oeiras, in Lisbon, with her often absent mother. What Mila seems to be revolving around with all these shifting reminiscences is the fundamental doubleness of who she is. She introduces a photographic “self-portrait”: the famous 1957 photo of Elizabeth Eckford, one of the Little Rock Nine, walking to school as white people behind her gawk and even bare their teeth. “I am all of the people in that portrait at once,” Mila declares. “The raging girls in the photo are the nervous tremor (which brings me shame) when a black man on the streetcar answers the phone, speaking loudly. ‘Shhh: pipe down,’ they say to me, I say to him, I say to myself. ‘Can’t you see the others?’ ” Almeida writes long, destabilizing, often disorienting paragraphs, where successive sentences can shift radically in time and space. But the reader is pulled along throughout by a sly, evasive humor—where unreliable memory ends, Almeida seems to say, storytelling begins.

Heady and smart, if you can follow the novel’s complex, associative train of thought.

GLORY AND ITS LITANY OF HORRORS
by Fernanda Torres
Fiction

THE INVISIBLE LIFE OF EURIDICE GUSMAO
by Martha Batalha

ME, MY HAIR, AND I
by Elizabeth Benedict
Fiction

WOMAN OF THE ASHES
by Mia Couto
Newsletter sign-up