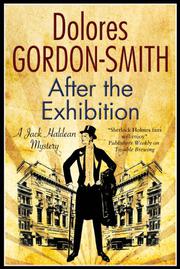 An amateur sleuth falls for a murder suspect.

Accompanying his pal DCI Bill Rackham to a London showing of work by the firm Lythewell and Askern, Church Artists, Maj. Jack Haldean finds the dull exhibit enlivened by (1) Bill’s acquaintance with Colin Askern, whom he met in a World War I trench; (2) the presence of Betty Wingate, an attractive poor relation taken in by Daniel Lythewell; and (3) the sudden collapse of a charity flag seller on the steps of the exhibit hall. When Betty comes to Scotland Yard looking for help, Bill brings her to Jack with an unlikely story about a dead woman on the sofa of the cottage of Signora Bianchi, a femme fatale who seems to be involved with both Colin and his father. No body is found, and Betty is dismissed as an attention seeker. But Jack and Bill, visiting the cottage, find evidence that she may be telling the truth. Jack’s clever explanation of what might have happened to the signora is smashed when she turns up alive and well. A firestorm ensues when the signora reveals that she was, and legally still is, married to the senior Askern, and Colin is her son. The sleuthing duo remain involved while Jack investigates the secrets of a wildly overblown unconsecrated chantry that was built by Daniel Lythewell’s father as a monument to himself. The chantry’s floor contains a series of inset metal plates with cryptic hints of a missing treasure. When the flag seller and a church artist are murdered, Betty looks more and more like the prime suspect

While not up to the gold standard set by the best of the classic mysteries, Gordon-Smith’s eighth return to the past (Blood From a Stone, 2013, etc.) provides plenty of between-the-wars atmosphere and a surfeit of red herrings.