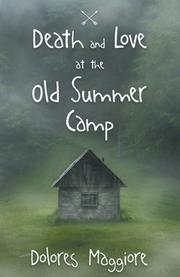 DEATH AND LOVE AT THE OLD SUMMER CAMP

In Maggiore’s (Love and Lechery at Albert Hall, 2018, etc.) YA mystery, a teenager’s summer vacation takes an unpleasant turn when she and her best friend (and secret crush) uncover an old murder.

In 1959, 15-year-old Pina Mazzini is staying in a forest cabin with her parents near an abandoned boys camp. While wandering the camp’s ruins, she suddenly has a disturbing vision of a bully taunting a younger boy that seems to end violently. She’s certain that she’s inherited her Sicilian grandmother’s ability to see the past and future, so she rushes to tell her friend Katie McGuilvry what she saw. They go in search of answers in the surrounding area; Katie finds a bone in the crafts cabin, she and Pina find a bloodstained shirt, and Pina and her father find a finger bone with a ring on it in a lake. Pina has more intense visions in which she sees teenage boys plotting the murder, and she eventually realizes that she and Katie are finding evidence of what might be a larger conspiracy. However, they can’t go to their parents about it, because Katie’s father might be involved; he went to that summer camp in his youth, and he has the same square tattoo as the boys in Pina’s visions. Then Katie’s father invites his old camp friends to visit. Meanwhile, Pina grapples with her romantic feelings toward Katie. Indeed, in this debut novel of a series, the narrative focuses mostly on the developing relationship between the two teens. The author’s tendency toward jokey dialogue can sometimes overwhelm the story, but the overall narrative effectively depicts their emotions of initial uncertainty and caring friendship. In the midst of this, however, the murder mystery doesn’t maintain very much of a sense of gravity, and the various clues all end up fitting together a bit too neatly. However, once Pina and Katie begin to see how the killing is connected to family members and friends, the book offers an engaging, suspenseful dynamic.

A pleasant pastiche of teen sleuthing and coming-of-age gay romance.