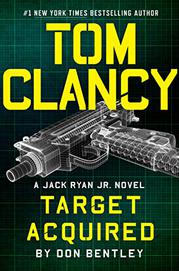 Ryan is in Tel Aviv on an “asset-validation exercise” for a private company referred to as The Campus, and he takes time to hang out at the beach. There, he sees a woman with a child who he can tell is autistic, and he saves her from a knife-wielding attacker. She’s flummoxed; who’d want to hurt her? When mother and son leave, Ryan wants to return the boy’s dropped Captain America toy. “What could go wrong with that?” he muses naïvely. Only three hell-raising threats in one day. Almost immediately he meets agents from Israeli security, Shin Bet. Who is he? What’s he doing there? But though he doesn’t lie about his name, no one ever exclaims, “Wow, you have the same name as the U.S. president. Any connection?” Anyway, Chinese State Security is also interested in the woman, and Jack doesn’t know why. And then mother and son are kidnapped. True to the Clancy style, what begins as the attempted return of a toy mushrooms into a threat of global conflict—“no good deed goes unpunished” is an apt cliché. Other enemies include Iran's Quds Force, an apocalyptic cult—and some smart jihadis, because “the dumb jihadis died a long time ago.” Ryan is a fierce warrior when the need arises, and he refuses a direct order to return to the U.S.: “Sorry, sir…no can do. I’ve got two innocents still at risk—a mother and child.” So even when the bad guys try to crucify him, “nobody did cornered junkyard dog better than Jack.” Meanwhile, an airborne threat may destroy Tel Aviv. The story has some nice wordplay, with helicopters “clawing for altitude like homesick angels,” and the F-35 being “part ballerina, part racehorse, and all killer.” While on the ground “blood flowed and bones broke,” and a female fighter jock has the final say.

Fast, furious Clancy fare, fun even though you already know who wins.