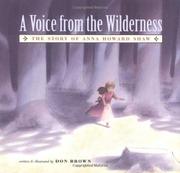 A VOICE FROM THE WILDERNESS

The Story of Anna Howard Shaw

Brown (Mary Kingsley in Africa, 2000, etc.) relies on Anna Howard Shaw’s autobiography as the inspiration for his account of a woman whose pioneer background prepared her for the causes she championed in her adult life. “By most measures, Anna Howard Shaw’s life was hard and filled with struggle. But Anna used her own scale and kept her own measurements, and that made all the difference.” So begins the story of a young girl who survived a perilous crossing of the Atlantic, settled in Massachusetts, and then spent one and a half years in the Michigan wilds, where the family was 100 miles from the railroad and 40 miles from a post office. Although Anna learned to hook fish with the iron wires from her hoop skirts and chop sod with an ax to plant corn and potatoes, she didn’t have any schooling. But there were books and she read histories, novels, and math texts until she knew them by heart. She was a schoolteacher at 15 and eventually graduated from college and received a medical degree—highly unusual for a woman in her time. She became a minister and was angered by the fact that women’s wages were half of what a man earned. She spoke to people around the world, battling for women to win the right to vote since that was, to her, the first step to independence for women. Anna Shaw died one year before the woman’s right to vote became law. Elegant phrasing and seamless narration complement pastel watercolors. The paintings are especially effective in conveying the mood of the text. Quiet, lovely scenes of the forest are in contrast to the lively scenes of the children carrying out chores. An author’s note fleshes out the details of this extraordinary woman’s life. (Biography. 7-9)