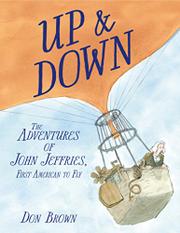 The Adventures of John Jeffries, First American to Fly

Brown’s latest (Older than Dirt, 2017, etc.) follows the journey of balloonist John Jeffries, doctor and meteorologist, through his flight across the English Channel in 1785.

At the end of the American Revolution, Jeffries, a Tory, fled to England, where he was swiftly engulfed in “balloon mania.” An avid amateur meteorologist, Jeffries was thrilled by the possibility of recording new information at different altitudes. Jeffries quickly teamed up with Frenchman Jean-Pierre Blanchard (husband of famed balloonist Sophie Blanchard) for two flights. For their second, the duo had an outlandish proposition: to be the first to fly across the English Channel from Britain to France. Unfortunately, the flight didn’t go as planned, and the duo was forced to unload as much ballast as possible—including their clothes—before ultimately landing unharmed, albeit underdressed, in France. Brown’s oil-pencil–and-watercolor illustrations are true to form, but readers may find themselves with more questions than answers thanks to uneven plotting and a lack of focus. Slight space is devoted to Jeffries pre-Channel flight, 18th-century ballooning culture, and the science of ballooning, while over half of the book is devoted to his most famous flight. Frustratingly, this causes the narrative to read like neither a full introductory biography of Jeffries’ life nor a strict account of the Channel flight. Jeffries, Blanchard, and spectators are all white.

“Up and down” indeed.