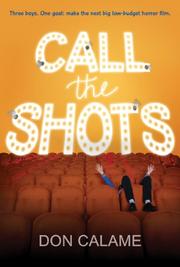 Sean isn’t initially swayed by his crazy friend Coop’s idea to make himself, Sean and their third amigo Matt into millionaires by shooting a low-budget horror film. But after his parents announce that they are having another baby and there is no money for a bigger house, Sean decides to sign on as screenwriter to avoid moving into his mean twin sister’s room. However, writing the movie is the least of his problems. Sean also finds himself embroiled in a terrifying romantic four-way with his new, Swiss-cheese–smelling, stalker girlfriend Evelyn, his drama crush Leyna and his sister’s best friend, the enigmatic Nessa. Sean’s well-intentioned attempts to juggle his relationships, school and the movie shoot result in the kind of outrageous mishaps that fans have come to expect from author Calame, who once again does not disappoint, with grade-A gross-outs that include a colossal bird-crap bombing and a chorizo-and-chili projectile-vomiting incident.

Fearlessly foul, this consistently comical series should be required reading for all teenage boys and anyone else with a strong stomach and highly sensitive funny bone.