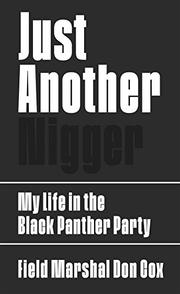 My Life in the Black Panther Party

An unapologetic firsthand account of the Black Panthers during their turbulent prime.

Cox’s memoir, written in the early 1980s and posthumously published, provides a plainspoken account of a transformative moment in history and Cox’s own journey from commercial photographer to committed revolutionary. His daughter Kimberly Cox Marshall provides a loving foreword (“Daddy, I kept the title you wanted”), and publisher Steve Wasserman offers further context in his introduction, describing the author’s work “as Field Marshal in charge of weapons procurement, gunrunning, and planning armed attacks and defense” as well as “his star turn as a party spokesman raising money at the Manhattan home of Leonard Bernstein.” Cox recalls a taste for nonconformity from an upbringing in Missouri and California, but his radicalism coincided with the 1965 Watts uprising. “I admit to having felt joy—joy and pride at seeing blacks finally saying, with their actions, that they were fed up.” In 1967, he positively impressed founding Black Panthers David Hilliard and Huey Newton, and he discloses early plans for ambushes of police to serve as a blow against race-based brutality. The group seemed both righteous and practical in their outlook, but circumstances spiraled out of control following violent skirmishes and Newton’s arrest. With key leaders in jail or killed in police shootouts, surviving members pursued a Marxist-Leninist ideology of rigid purification. Cox documents plenty of internecine drama as he rose through the ranks, culminating in his visit to the fugitive Eldridge Cleaver, who “told me [Hilliard] had sent me to Algiers for them to kill me!” About his 1972 resignation, the author ruefully concludes, “many of the conspiracy cases brought against the party were due to our own mistakes and excessive zeal whenever a police agent was discovered in our ranks.” The narrative is intimate and exciting, although Cox seems too close to events: He elides some peoples’ identities and makes arcane references to late-1960s radicalism, such as the conflict between the Panthers and black nationalists.

Despite flaws, a valuable primary-source recollection from an incendiary time.