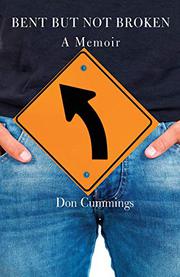 BENT BUT NOT BROKEN

A playwright recounts his struggles with an embarrassing penis ailment in this debut memoir.

During the Great Recession, Cummings and his boyfriend of 16 years, Adam, moved to a small studio apartment in Queens. The author had noticed that his penis had begun to bend painfully to the right at an angle of 22 degrees, and he was becoming alarmed by it. A trip to a doctor confirmed that he was suffering from Peyronie’s disease, a genetic condition in which plaque builds up between the tissue layers of the penis. “Think of a piece of scotch tape on a balloon,” said his physician, searching for a suitable explanation. “When you blow up the balloon it bends in the direction of the tape because of the constriction. We need to break up that tape.” The treatment involved painful injections, not to mention exposing himself to a seemingly endless number of dispassionate medical professionals. The effect on his sex life—and the added stress for the already anxious playwright—put a strain on Cummings’ relationship with Adam and his flings with a number of other men. Even more, the situation caused the author to contemplate his long relationship with his suddenly endangered body part: what it meant to himself as a man and a mortal. Cummings’ skills as a writer are apparent from the beginning. His prose is effortlessly clever, finding the entertaining medium between lyricism and sass: “As I plowed through the field of life with its fecund and fallow seasons, I had at least had this decent tuber to hold on to. But blight was setting in, famine most likely soon to follow. Death felt more real. I was concerned that depression would take me over. It did—but not for long.” The frankness with which he discusses his problem, the treatment, and his sex life makes for an oddly shocking book—one rarely reads quite so much about penises, as central as they often are to literature. He manages to demystify and destigmatize Peyronie’s, which though obscure is not completely uncommon. More than that, he makes the most of an undignified opportunity to examine his own masculinity.