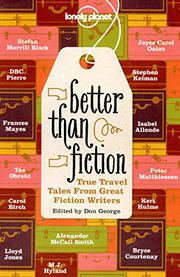 An uneven collection of pieces that extend and expand the typical notion of travel writing.

The subtitle proclaims these “True Travel Tales from Great Fiction Writers,” though the contents raise some issues. All of the included writers have written some fiction, but many are known as well (or even more) for their journalism, including Jan Morris, who has earned her reputation primarily as a travel writer (yet here writes of an imaginary destination). Some of the authors write not as travelers, but as immigrants who have made adjustments to a different home or adults who have made a homecoming. Others write of places where no traveler would likely visit—e.g., the cellblock of San Quentin, explored by Joyce Carol Oates in the longest and most emotionally powerful piece. Yet, cumulatively, they reinforce the assertion of Bryce Courtenay (“Australia’s top-selling novelist”) that “[g]ood travel is returning home a slightly bigger part of everyone and not quite the same person as when you set out.” His essay, more of a trend piece than an illumination of a destination, is about how “personal adventure travel has come of age. For a great many of us, our travel mindset has largely changed from seeing to doing and from observing to participating.” The most affectingly literary of the inclusions is by Britain’s Stephen Kelman, on a reporting trip to India, where he realized that “the world is as weird and sad and beautiful as I would have it be, and that my place in it is as inevitable as the wind in the trees.” Other notable contributors include Isabel Allende, Kurt Andersen, Pico Iyer, Alexander McCall Smith and Frances Mayes.

Some interesting reading for armchair travelers.