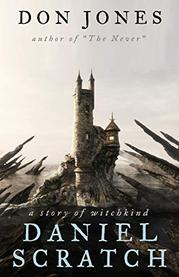 A teenage boy learns how to wield a powerful magical force in this fantasy novel, the first in Jones’ YA series.

Since he was 10, after his parents’ deaths, Daniel Scratch has lived alone in the once-grand old family house, looked after by brownie servants with occasional attention from his great-great-grandmother, who “declined to leave the house simply because she’d died.” Now, on Daniel’s 13th birthday, Grandmother summons him to her attic abode, where she informs the boy that he will be tested and take his place among other witchkind. He passes, but it turns out that he’s no ordinary witch. If he were, he’d attend a witchkind school for his education, but Daniel’s special abilities mean he must be apprenticed for personal instruction. The boy travels to a remote rock-bound islet and the Tower of Endings, where he meets Kirmin, an ebony-skinned woman of uncertain age to whom he gives his true name, Daniel Drake Teisejas. (The book seems to assume a White default since only Kirmin’s skin color is described.) His new mentor begins teaching Daniel about the history, philosophy, and practice of witchkind in eight Lessons over five years. He learns, for example, of the six Axes of Power, which correspond to the world’s wild energies, such as the sea, fire, and earth, and the seven Forms each axis possesses (Communication, Travel, Mind, Defense, Attack, Essence, and Calling). The Sixth Axis—Daniel’s—connects with “the power of Endings and Conclusions.” Unlike the other Axes, the Sixth Axis has only one adherent at a time. Between lessons, Daniel practices runes and spells while exploring the tower with its books, maps, and other amenities. By the end of his training, Daniel must use his powers to face a potentially world-destroying crisis that could break down the Veil between humans and witchkind.

Jones has written several SF novels; this is his first work of fantasy. This story may bear some resemblance to other novels about young people trained in magic powers. But Jones has created something new, compelling, beautifully written, and somewhat reminiscent of Ursula Le Guin’s A Wizard of Earthsea (1968). Daniel’s powers are well balanced by the loneliness of his isolated tower and his great responsibilities (an adherent of the Sixth Axis must serve as a judge for witchkind). Daniel’s appeal steadily increases thanks to his intelligence, thoughtfulness, and self-direction, as when he gives himself an exercise routine, growing stronger physically as well as magically. Though the novel includes a great deal of lore, the author handles its exposition gracefully, introducing new information naturally. Runes, a chief component in working magic, are also well integrated; their forms aren’t just arbitrary symbols, as with the communication rune that resembles an ear. Another nice touch is using Lithuanian for the language of witchkind—communicationis šnabždesys, for example—which to English speakers sounds and looks appropriately exotic.

An engrossing, well-written, and original story; readers will be eager for the next installment.