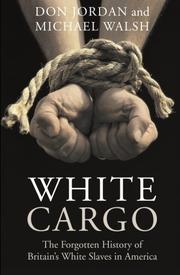 The Forgotten History of Britain’s White Slaves in America

by Don Jordan and Michael Walsh

Before the 18th century, when Southern tobacco grandees and West Indian sugar planters imported Africans for cheap labor, the New World was the forced destination of many of England’s unwanted—the rootless, the unemployed, the criminal and the dissident. Jordan and Walsh systematically dispel the creation myth—“in which early American settlers are portrayed as free men and women who created a democratic and egalitarian model society more or less from scratch”—surrounding the arrival of the English settlers by documenting several waves of  “victims of empire” who were often treated as savagely as black slaves and toiled alongside them: boatloads of children raked up from the streets of London, forcibly transported to places like Virginia, sold to planters and often dead within a year; vagrants and petty criminals, ranging from beggars to prostitutes; the Irish, dehumanized and deported under Oliver Cromwell’s ethnic-cleaning policy; the kidnapped, often young people snatched from the streets by “ ‘spirits’ working to satisfy the colonial hunger for labor”; and the so-called “free-willers,” who agreed to become indentured servants in return for free passage and perhaps an illusory plot of land. The authors work chronologically, beginning with England’s Vagrancy Act of 1597, under which “persistent rogues” could be banished to the fledging colonies. As the first 100 street children were rounded up and sent off to work the tobacco fields of Virginia by 1618, kidnapping, or “spiriting,” became so prevalent and feared that it appeared in the work of Daniel Defoe and Robert Louis Stevenson. The authors conclude with the abject floating British prisons off the coast of newly independent America.

An eye-opening work to be read alongside Richard S. Reddie’s forthcoming Abolition!: The Struggle to Abolish Slavery in the British Colonies (2008).