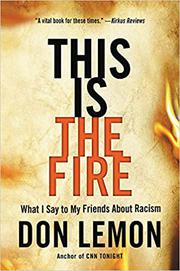 THIS IS THE FIRE

What I Say to My Friends About Racism

Readers who only know Lemon from his high-profile gig as a CNN anchor will be pleasantly surprised by his abundant prose skills. In his second book, the author not only plays off the title of James Baldwin’s classic, The Fire Next Time; he also echoes Baldwin’s opening salvo (both open with letters to the respective authors’ nephews) and its learned diagnosis of a sick society. Lemon begins with a mournful tone: “Today I heard a dying man call out to his mama, and I wept for the world that will soon belong to you.” This evocation of George Floyd compels us to take a long view of not just the tumult of 2020, but also the distinctly American history that brought us here. “Racism is a cancer that has been metastasizing throughout the land ever since Columbus showed up,” writes Lemon. “It’s persisted because the right people had the luxury of ignoring it. Not anymore. With the election of a blatant White supremacist, the problem became palpable, impossible to ignore. It touches every one of us, because it’s a detriment to every aspect of our society.” Thankfully, within this dilemma, the author finds a sliver of hope. When a problem is impossible to ignore, it may eventually be solved—at least if large coalitions decide they share enough common interest to make it happen. Lemon strikes a nice balance between the personal and the political, sharing moments of his life with his fiance, Tim, and his family, dealt a severe blow by the death of his sister, Leisa. Throughout, the author demonstrates an impressive ability to loop it all together and make it stick. He puts 2020 in context and gives it the language to sing a quietly outraged song.

Long on context and analysis, this is a vital book for these times.