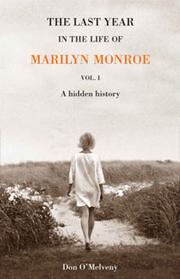 THE LAST YEAR IN THE LIFE OF MARILYN MONROE VOL. 1

In this mostly fictionalized account, O’Melveny (Extramarital, 2011) provides the backstory of a recently discovered, long-lost manuscript that provides intimate details of the last days in the life of Marilyn Monroe.

The prologue of Volume 1 introduces Marilyn on the night before her death as she prepares to be wed, once again, to the love of her life, Joe DiMaggio. She’s in a pensive but cheerful mood, and she’s grateful for this second chance at building a life with DiMaggio. From there, a series of dated vignettes draw the reader into Marilyn’s inner circle of celebrities, power brokers and politicians. As many who knew her have affirmed, she is not the ditzy blonde bombshell that was her public persona. Through bits and pieces of dialogue, Monroe’s inner conflict—her desire to remain Norma Jean while fulfilling her obligation to be the celebrity goddess everyone expects—is revealed in short, often unsatisfying glimpses. The book is full of allusions, teasers and suggestions meant to titillate one’s curiosity not only about Marilyn, but about the powerful men who populate her life. President John F. Kennedy and Attorney General Robert F. Kennedy are featured prominently in a parallel storyline involving the mob, Frank Sinatra and Fidel Castro. These plotlines will most likely intersect at some point in a future volume, although it’s not clear when or how. While O’Melveny’s account of Marilyn’s final year isn’t in-depth or even wholly true, the dialogue is very well written. Giving voice to public icons is no easy task, but O’Melveny’s lines ring true, lending an air of credibility to every word spoken.

This enjoyable yet not entirely satisfying story will leave readers wanting to know more as they consider the line between fact and fiction.