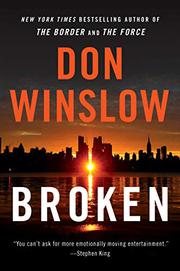 The world is a broken place, thinks Eva McNabb, a 911 dispatcher in New Orleans in the title novella, and “you come out broken.” Her sons, Danny and Jimmy, are cops, and Jimmy is “as sensitive as brass knuckles.” When he and his partner stumble on a mountain of meth, gunfire and heartbreak follow. In Crime 101, a jewel thief named Davis notes the basics of successful crime—“keep it simple,” for example. He never strays far from “the 101,” his beloved California Highway 101. When Davis jacks $1.5 million in diamonds, Lt. Lou Lubesnick tries to identify and capture him, and it all comes down to this: “What would Steve McQueen do?” There are so many good lines in these yarns. How could the reader resist The San Diego Zoo’s opener: “Nobody knows how the chimp got the revolver”? This story is especially funny: A good cop becomes the department’s laughingstock after disarming Champ the chimp. Lowlife Hollis Bamburger once turned in a term paper with the Wikipedia heading still on it. Even Superman and Spartacus take a hilarious turn. Meanwhile, the characters in Sunset and Paradise spend a lot of time surfing or thinking about surfing. A bail bondsman looks for a heroin-addicted surfing legend, and a woman in Hawaii thinks Peter, Paul, and Mary were Jesus’ parents. Each storyline will keep readers entertained with wit, humor, and occasional sadness. Finally, in The Last Ride, a Border Patrol agent simply wants to return one Salvadoran girl to her mother. The tale is sad and powerful as it comes back to the theme that everyone is broken somehow.