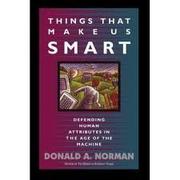 THINGS THAT MAKE US SMART

Defending Human Attributes in the Age of the Machine

by Donald A. Norman

Cognitive psychologist Norman searches for humane technology and just plain user-friendliness in the paraphernalia and artifacts employed in everyday life. What he finds is that ``today we serve technology,'' though, of course, ``technology should serve us.'' Currently a thinker at Apple Computer (actually, ``an Apple Fellow''), Norman expands on his previous offerings (Turn Signals Are the Facial Expressions of Automobiles, 1992; The Psychology of Everyday Things, 1988, etc.)—and his current text, though more thoughtful, is just as user-friendly as his earlier works. Citing the appalling slogan of the 1933 Chicago World's Fair, ``Science Finds, Industry Applies, Man Conforms,'' the good Apple Fellow offers a new guiding principle: ``People Propose, Science Studies, Technology Conforms.'' Usage, he says—especially of computer software—follows design, but it doesn't have to be that way. With intelligences now darting though cyberspace, Norman can differentiate between the human and the artificial kind. Neither of them is the sole, true McCoy: They're just different, each with different innate abilities. People are better at language, the arts and emotions that make life worthwhile. Technology is better at such things as logic and mathematics, both invented artifices. Not new notions, certainly, but when was the last time you heard a technocrat say that ``our goal should be to develop human centered activities, to make...the task fit the person, not the other way round''? Norman's presentation is eminently accessible, with incidental insights into such matters as primitive office procedures, and why, for addition and subtraction, Roman numeration is superior to Arabic. As he notes, books are one form of technology. Television is another. It might be interesting to see if his message could survive a change of medium, perhaps to educational TV. Lots of things make us smart, Norman points out. His book could be one of them.