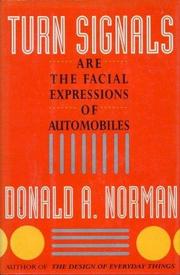 TURN SIGNALS ARE THE FACIAL EXPRESSIONS OF AUTOMOBILES

by Donald A. Norman

It's coping with the technology of quotidian life that wears us down, of course. Norman (Cognitive Psychology/UC San Diego) reassures us that it's not our fault: It's design flaws. If it's broke, Norman knows how to fix it. (The original title of his The Psychology of Everyday Things, 1988, didn't quite work, so subsequent editions substituted ``Design'' for ``Psychology''). Cognitive science—the study of the way stuff gets known—naturally covers a lot of things, and here some are discussed more cogently than others. On learning that the odds are 50,000 to 1 against getting stuck in an elevator, Norman panics. Doing the math, he figures he will get stuck two or three times in his lifetime. On the other hand, he offers a study, actually going to the heart of scientific method, on the thickness of book jackets; a consideration of the meanings of ``real time'' and ``brain power''; an entertaining complaint against Mother Nature for egregious soil erosion; a survey on the uses of the refrigerator door as a communication center; and much intelligence on the real causes of ``pilot error.'' To err may be human, but it may also be the result of bad design. Norman argues for logical relations between a stove's knobs and its burners (``affordance mapping'') and for the efforts a writer owes to readers. The book's technical jargon is minimal and its author writes with the apparent ease of an Asimov. An engaging work by a benign technocrat who has designs on our minds.