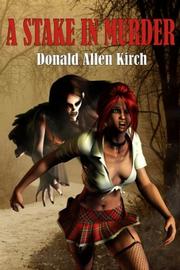 A STAKE IN MURDER

Kirch offers an unusual twist on the overdone vampire mythos in this simplistic supernatural thriller.

For the creature at the center of his paranormal tale, Kirch wisely uses a variation on vampires, the Filipino aswang. Anton Gerrold was thought dead from a stake in the heart after a series of gruesome murders in Phoenix in 1991. But—oops—the authorities missed his tiny heart. So now Gerrold has returned to terrorize women in Los Angeles more than 20 years later. And he makes a horrific monster: “There was a scent to pregnant women that the vampire found irresistible….Nothing was more fantastic than unborn flesh being ripped between his teeth.” Capt. Darren Matheson, a veteran homicide detective, gets sucked into a world he doesn’t understand while investigating these bizarre attacks. The FBI agent who thought Gerrold had been destroyed sends Matheson to retrieve his former helper, disgraced reporter Sebastian Hemlock, from Kansas City, where he was resigned to working for a tabloid newspaper. Hemlock grabs this chance to get the job done right while redeeming his reputation and maybe rekindling his love with Karon Ramiko. “The FBI made him destroy my life as a means of controlling me and what I know: that there are indeed monsters in this world,” Hemlock says. While Kirch’s original concept is intriguing and he provides a diverting governmental-coverup subplot, this short narrative falls together far too neatly. Too quickly, Matheson, Hemlock and his ex-girlfriend Lt. Karon Ramiko have located Gerrold’s hideout and marched off on their mission to slay the beast, without enough time to build suspense. There’s little space dedicated to fleshing out these cardboard characters, either. Instead, it’s the steady cop and the bickering couple, who are still in love, that team up to save the day. The intriguing concept is wasted on a predictable narrative, adding little that’s new to the genre.

Not enough unique here to leave a mark on a horror fan’s imagination.