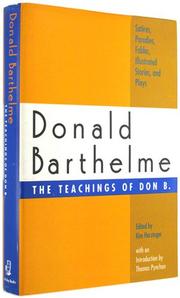 THE TEACHINGS OF DON B.

An unusually miscellaneous miscellany aptly described by its subtitle: marginal work from the late author who became the leading American short-story writer in the 70's. Barthelme the humorist is the preeminent figure on display here, whether in extended parodies and satires (``The Teachings of Don B.: A Yankee Way of Knowledge,'' ``And Now Let's Hear It for the Ed Sullivan Show!'', ``Bunny Image, Loss of: The Case of Bitsy S.''); unsigned columns from the New Yorker's ``Notes and Comment'' pages; collages of old engravings shanghaied into ludicrously inappropriate narratives (``A Nation of Wheels,'' ``The Educational Experience,'' ``The Dassaud Prize''); or three formerly unpublished plays (``The Friends of the Family,'' ``The Conservatory,'' ``Snow White''). The revelation is how adept Barthelme was at recycling material for use in columns, sketches, stories, and plays—as indicated here by Herzinger's notes. The disappointments are, first, the slightness and datedness of so much of the material—parodies like ``That Cosmopolitan Girl'' and ``L'Lapse'' have dated almost as badly as their targets, and three plays mostly demonstrate why Barthelme was well-advised to give them up—and, second, the large number of reprints from earlier collections (31 of 63 pieces; Barthelme's 1974 miscellany Guilty Pleasures is picked particularly clean). The unpicked plums (a New Yorker interview with King Tut, a profile of artistic baseball greats T. S. Eliot, Django Reinhardt, Susan Sontag, Willem de Kooning, and Piet Mondrian) are few and far between; time and again, the pieces that most please turn out to be from Come Back, Dr. Caligari or Overnight to Many Distant Cities. Even minor Barthelme is better than no Barthelme. A few savory hints here whet the appetite for more: a promised collection of essays and interviews, another of uncollected stories. (Copiously illustrated with loopy prints, not seen but fondly remembered.)