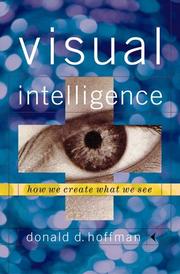 How We Create What We See

A cognitive scientist synthesizes recent findings of vision researchers to unveil some of the secrets and explore still-unsolved puzzles of how we see. Hoffman (Univ. of Calif., Irvine) argues that children are born with innate rules of universal vision just as Noam Chomsky has argued for innate rules of universal grammar. These inborn rules of vision allow children to acquire, through visual experience, rules of visual processing by which the child constructs, in a multiplicity of stages, visual scenes. The first 20 of these rules, as spelled out here, have to do with seeing shapes. Rule 1, for example, is “Always interpret a straight line in an image as a straight line in 3D.” Next are eight rules for color and seven rules for motion. These are illustrated with line drawings and photographs—120 in black-and-white and 30 in color—that draw the reader into participating in his demonstrations. The problem of showing motion is neatly solved by Hoffman: he directs readers to his Web site, where all the motion displays discussed here can be viewed. Like V.S. Ramachandran (Phantoms in the Brain, p. 1096), Hoffman draws on patients with pertinent brain anomalies to explain normal visual intelligence. Also like Ramachandran, he uses phantom limbs to explore briefly the sense of touch, for Hoffman is persuaded that the brain constructs not only what is seen, but also what is felt, heard, smelled, and tasted. He closes with a venture into the world of virtual reality that inspires a series of probing questions into the relationship between what we see relationally (i.e., what we interact with) and what we see phenomenally (i.e., what the visual intelligence constructs). With its many fascinating visual demonstrations, Hoffman’s presentation fully engages the reader, demanding and rewarding attention.