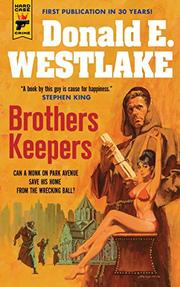 A tiny band of monks facing the loss of their monastery in midtown Manhattan fight back in this slight, humorous 1975 charmer.

You wouldn’t expect to find the Crispinite Order of the Novum Mundum lodged on Park Avenue between 51st and 52nd streets, and come New Year’s Day, you probably won’t. While they were meditating on otherworldly matters, their 99-year-lease, last renewed in 1876, was optioned from Daniel Flattery, the current owner of their land, by developer Roger Dwarfmann, who plans to raze historic structures all along the block to make way for a 67-story office building. The 16 sort-of-cloistered monks can’t even find their copy of the lease, and they haven’t a clue how to stop the wrecking ball from exiling them to the likes of New Paltz. The most important upshot of a delegation’s visit to Dan Flattery is that Brother Benedict, the winsome narrator who’s been a member of CONM for 10 years, falls head over heels in love with Eileen Flattery Bone, their leaseholder’s daughter. Anyone familiar with Westlake’s peerless crime comedies (Help I Am Being Held Prisoner, 1974, etc.) will be confident that the unlikely romance between Brother Benedict, ne Charles Rowbottom, and the divorcée who predictably describes herself as “the sincerest of Flatterys” will end in laughter, and the high point of the tale is this modern Candide’s trip to Puerto Rico to plead both his order’s case and his own to a young woman with nothing but sun and surf on her mind.

Not much in the way of felonies, and most of the other 15 monks are ciphers. But Westlake’s sweetly consecrated hero, at once disconcertingly direct and utterly clueless, will bring you to your feet cheering for his impossible cause.