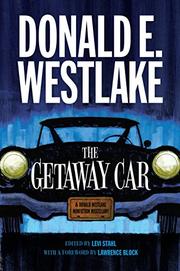 Westlake (1933-2008), who wrote under his own name and a handful of pseudonyms, was an award-winning writer of crime, mystery and detective novels; short stories; screenplays; and one children’s book. University of Chicago Press promotions director Stahl thinks this collection of Westlake’s nonfiction will please his fans; it’s likely these sharp, disarmingly funny pieces will also create new ones. The editor includes a wide range of writing: interviews, letters, introductions to Westlake’s and others’ work, and even recipes. “May’s Famous Tuna Casserole” appeared in the cookbook A Taste of Murder. May is the “faithful companion” of Westlake’s famous protagonist John Dortmunder, “whose joys are few and travails many.” Another of his culinary joys, apparently, was sautéed sloth. One of the best essays is “Living With a Mystery Writer,” by Westlake’s wife, Abby Adams: “Living with one man is difficult enough; living with a group can be nerve-wracking. I have lived with the consortium which calls itself Donald Westlake for five years now, and I still can’t always be sure, when I get up in the morning, which of the mob I’ll have my coffee with.” Will it be the gloomy Tucker Coe, the professional hack Timothy Culver, the morose, exacting Richard Stark, the author of Westlake’s 24 Parker novels, or Westlake himself: modest, unpretentious and fun-loving. In “The Hard-Boiled Dicks,” Westlake considers the evolution and popularity of the detective story, the most appropriate term, he said, for the genre that included mysteries, suspense, crime and police procedurals. Crime, he thought, was essential to a storyteller: With society, the individual and a crime, “you have all the multiple possibilities of drama, plus all the multiple possibilities of free will; that is, life.”

Westlake kept a list of possible book titles, the last of which was Read Me. It would have been just the right one for this bright, witty book.