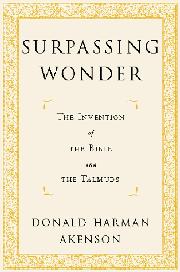 The Invention of the Bible and the Talmuds

Venturing as an amateur into biblical and Judaic studies, historian Akenson (Queen’s University, Ontario) constructs a brilliant integrative theory of continuities and parallels between Hebrew scripture, the New Testament, and rabbinic Judaism. Within today’s complex world of biblical interpretation, Akenson’s book falls under the rubric of canonical criticism: the extrapolation of meanings and intents from the final (canonical) forms sacred scriptures assumed. By his own terms for his project—to uncover “the grammar of biblical invention”—Akenson means to highlight both his theological neutrality on the issue of divine biblical inspiration and his awe-filled regard for the genius of the Jewish and Christian “inventors”: the author/editors who shaped the disparate materials they received, both oral and written, into literary masterpieces that met historically conditioned spiritual needs. The central need in question, according to Akenson, was to replace the temple of Jerusalem, destroyed first by the Babylonians in 587 b.c., and then again by the Romans in 70 a.d., with texts whose ideas could substitute for the temple-based ritual sacrifices. Temple-substitution is the common template over which Akenson lays Hebrew scripture, the New Testament, and the rabbinic literature, with startling and provocative results. The Torah, or first five books of Moses, traditionally most revered by Jews, becomes a relatively late, politically motivated extract out of a prior unit of nine books (Genesis through Kings, in the Hebrew Bible); the physically resurrected Christ becomes a biblically ungrammatical aberrancy; and rabbininc Judaism emerges as the younger sibling of Christianity. The intellectual shocks are hugely instructive (St. Paul conceived in relation to the gospels as the Mishnah to the Talmud), entertaining (Ecclesiastes as “camped-up staginess”), and conciliatory—for ultimately, Akenson hopes to reinvigorate Jewish-Christian dialogue with shared wonder over the literary ploys of genial scriptural redactors working common themes to opposite effect. Akenson successfully reproduces, in microcosm, an ancient world of scriptural ideas that he rightly calls “one of the greatest intellectual air shows ever conducted.”