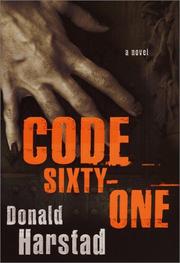 When Carl gets a signal to check on a female’s report of an intruder, she tells him she saw a white-faced man with fangs floating outside her second-floor window. Next day, this same woman’s boyfriend is found floating under a bridge, head bashed in and throat torn open. What ties white fangs to torn boyfriend? Next morning, still in bed, Carl gets a Code 61 call—a terse, circumspect radio communication that keeps people with police scanners from getting the message—that lends a spooky silence to his police radio as he drives to the crime. In a huge Victorian house, Carl absorbs the death scene before studying the bathtub’s young, bruised female corpse—a knife lying beside her and her neck slashed with a wound almost too deep to be self-inflicted. She’s Edith Younger, the niece of fellow cop Lamar, Carl’s boss. But to sharp-eyed Carl, something isn’t right: there’s not enough blood. He partners with series regular Hester Gorse, State Special Agent, whose smarts have been applied to hundreds of homicides. News reports spread about Dracula visiting the county—and who should show up but William Chester, vampire hunter, with stake, mallet, garlic, and crucifix. Building on the medical examiner’s wisdom, and on stains found on stairs, Hester and Carl slowly feed us a vast factual bag of crime scene detail that eventually leads to a band of deluded bloodrinkers led by extradelusional Dan Peale, who, like a good vampire, fears no bullet, especially when on methamphetamine and ecstasy. And perhaps he can fly as well, since this batty guy lives in a deserted mine.

The same spellbinding detail that Harstad fans ate with relish in Carl’s debut shocker, Eleven Days (1998)—where he was pitted against a satanic cult given to demonic atrocities. Yummy.