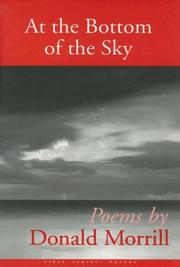 AT THE BOTTOM OF THE SKY

The author of the prose volume A Stranger’s Neighborhood (1997) collects his first volume of poems: a motley batch of mostly confessional and autobiographical verse, filled out with natural observations, and pieces that confirm this married white poet’s sensitivity toward women, blacks, and gays. Morrill (English, Univ. of Tampa) pops a few rhymes in his otherwise bland lines, with their conversational rhythms; and he visits a number of interesting places, including Mexico (where a street vendor guilt trips him), China (where he’s grossed-out at an animal’s dressing), Poland (where, in 1989, —the future is coming here again—), and Spain (where he’s robbed). Incidental and matter-of-fact, Morrill’s sentimental poems (—Bejewelled— and —Five Privacies—) celebrate intimacies with his wife. In a porno booth (—Onus—), he thinks of his gay brother and —the good man— he lives with, while a black boy he teaches swimming (—Underprivileged—) becomes his —conscience— somehow. —Nightly Constitutional— gently mocks the northern old folk who people Morrill’s Florida, and —The Sanctuary Manager— makes the case for preservation amid the rapid growth. Nothing distinguishes this debut volume of anecdotal verse from the heaps of similar, mostly inoffensive, books, with their commonplace observations on death, love, nature, and so on.