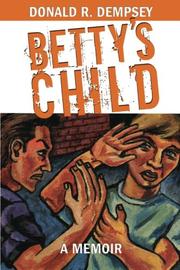 Dempsey illuminates the steep uphill scramble he had as a young man in a bad neighborhood. The memoir opens cinematically on a night of petty stealing, which escalated to the sort of theft that exposed young Donny to violent retribution. Donny attempted to guard himself, his younger brothers and his canine companion, Benji, from the string of hothead men his mother—the eponymous Betty—welcomed into the family’s rotating rental houses. In addition to fending off soul savers from the church Betty attended in order to run her scams, Donny turned down invitations to participate in crime more difficult than theft. Most of the book’s sequences—a teacher’s good-hearted but ultimately futile efforts to defend Donny from a bully—efficiently reveal the wit and determination, not to mention anger, that helped Donny survive. Other scenes, including a detailed account of the young author and his friend Rupe killing flies, register more as isolated anecdotes. Neither alarmist nor self-pitying, the memoir sees Donny through mounting losses of his sense of safety, his friends, his sanity-saving dog and his proximity to his brothers. While this account certainly couldn’t be called feel-good, it also isn’t altogether bleak. Early in the book, Donny poses a question to himself: “Would I wind up toothless, clueless and broke because of heredity—or because of where and how we lived?” Determined not to consider either factor an excuse, as a preteen boy he decided that, despite his abuse and neglect, he would choose better for himself. By turns heartrending and humorous, the book’s main events are accompanied by resonant dialogue that reveals the speakers’ natures. Distinguishing his from similar accounts, Dempsey’s discipline as a writer lends the real-life tale the feel of a fictional page-turner.