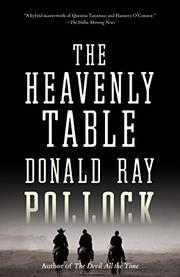 In 1917, after the death of their father, three dirt-poor Georgia brothers murder their employer, steal guns and horses, and embark on an epic crime spree.

Cane, Cob, and Chimney Jewett cut a wide and bloody swath as they head north toward Canada—they even shoot down an airplane in one memorable scene. By the time they reach southeastern Ohio, there’s a big bounty on their heads and a passel of slapdash posses on their trail, and the rap sheet of their legend includes not only the things they have done, but several they haven’t (necrophilia, for instance). Finally they pause in southern Ohio, where they spend a few days recovering (one brother has been wounded) on the homestead of Ellsworth and Eula Fiddler, plain country folk who take them in for what turns out to be a rural idyll. Then, motivated by the desire to spend some of their ill-gotten gains on the high life, prostitutes, even a fast car, they move on to nearby Meade, a military-camp crossroads that’s rough and chaotic and about to get even more so. This is in most ways pretty standard rural gothic, full of bright-hued mayhem and scatological wit, but Pollock (The Devil All the Time, 2011, etc.) brings way more flair and invention to the enterprise than most writers could.

A darkly comic gorefest by a gifted writer.