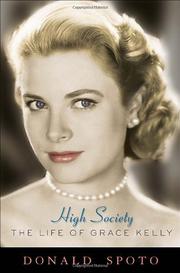 The Life of Grace Kelly

Veteran celebrity biographer Spoto (Spellbound by Beauty: Alfred Hitchcock and His Leading Ladies, 2008, etc.) capitalizes on his personal friendship with actress and honest-to-goodness princess Grace Kelly (1929–1982) to create an affectionate, informative, though somewhat bland account of the screen icon’s life.

Kelly was born into a well-established, wealthy Philadelphia family and enjoyed the privileged upbringing typical for a girl of her class, though she suffered from a lifelong sense of alienation from her success-oriented father and her cold, disapproving mother. With her unforgettable patrician good looks, Kelly found instant success as a model and quickly made a name for herself on the Broadway stage, abetted by such influential family members such as her uncle, playwright George Kelly. Hollywood beckoned, and Kelly made a handful of classic films, including The Country Girl (1954), for which she won an Academy Award; the musical High Society (1956), co-starring Frank Sinatra and Bing Crosby; and three pictures with the legendary Alfred Hitchcock: Dial M for Murder, Rear Window (both 1954) and To Catch a Thief (1955). Spoto is particularly interested in the relationship between Hitchcock and his muse, a fraught collaboration complicated by the director’s possessive, unrequited passion for the beautiful actress. Kelly famously left show business to marry Prince Rainier III of Monaco, where she devoted the balance of her short life to raising her children and to matters of state. Spoto identifies Kelly’s fresh, affectless acting style as the key to her cinematic appeal, and goes on at length about her aptitude for “high comedy,” which evidently consists of polite farce free of vulgarity or unpleasantness. The author, a meticulous writer, is guilty of placing Kelly on a pedestal, much as her character is damagingly “worshipped” in High Society. Instead of digging for new or surprising insights into her work or persona, Spoto repeatedly praises Kelly’s fine spirit and refutes the claims of the actress’s rumored promiscuousness.

A solid reference and affectionate remembrance, but a rather toothless biography.