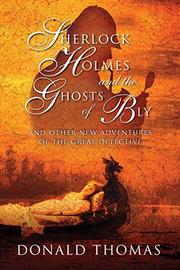 SHERLOCK HOLMES AND THE GHOSTS OF BLY

And Other New Adventures of the Great Detective

New challenges—a novel, two novellas and a bagatelle—for the inimitable sleuth and his stalwart amanuensis.

The opening novella, "The Case of a Boy's Honour," is clearly inspired by Terence Rattigan's The Winslow Boy. A student at exclusive St. Vincent's Naval Academy stands accused of stealing a postal order, and the postmistress is the chief eyewitness. Holmes methodically discredits the seemingly airtight case against the boy while uncovering disturbing events at the school. Holmes' elder brother Mycroft makes a cameo appearance. The novel-length "The Case of the Ghosts of Bly" weaves magic and mediums into a tangled story of murderous ghosts set at the venerable country estate first made famous by Henry James. A key figure in the crimes is the enigmatic governess Miss Temple, whose spectral sightings triggered panic at Bly and led her to a murderous insanity and Bedlam, where Holmes and Watson question her. Several more will die before Holmes can expose both the charlatans and the killer. The fragmentary "Sherlock Holmes the Actor" recounts the sleuth's pre-Watson fling with the theatre. "The Case of the Matinee Idol," building on that theatrical experience, probes the murder of legendary actor Carodoc Price, who was poisoned on stage in front of a sizable audience. Holmes must put aside his personal dislike of the theatrical veteran to solve the baffling crime.

The prolific Thomas (Sherlock Holmes and the King's Evil, 2009, etc.) recreates Holmes' milieu with a sure hand, gracefully spinning his well-appointed yarns.