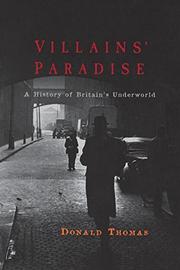 A History of Britain’s Underworld

The subtitle is misleading: Thomas focuses on the 25 years following World War II. Like his earlier true-crime works (The Victorian Underworld, 1998, etc.), this one evidences the author’s prodigious research of newspaper and criminal-court archives. Thomas also mixes in numerous allusions to the era’s crime novels and films, endeavoring to demonstrate how popular culture influenced, perhaps even inspired, the miscreants. He manifests some nostalgia for the death penalty, abolished in England in 1964, and several times implies that certain crimes (e.g., cop-killing) cry out for it. Encyclopedic in scope and style, the text begins with a few chapters on the austerity of daily life at the end of the war before moving on to the main narrative, a recitation of various sordid and celebrated cases. Some of England’s more notable nasties stalk these pages: sadistic murderer Neville Heath, blood-drinking killer John Haigh; John Christie, who stored his victims under the floorboards; postal robber Billy Hill; and 1950s street punks the Teddy Boys. The author examines as well some of the era’s biggest heists, involving banks, trains, postal vehicles and armored cars. He worries about the scourge of drugs and drug lords. He chronicles the brutal careers of twin brothers Ronnie and Reggie Kray, whose huge funeral processions rivaled those of royalty. Some well-known non-criminal names also appear in these pages. Did John Fowles borrow material from an actual 1957 case for his 1963 novel The Collector? Did the cops really find cannabis in Mick Jagger’s house in 1969, or did they plant it? The Jagger question appears in one of the later chapters, which take a quick look at cases involving police corruption—and heroism.

Comprehensive to a fault.