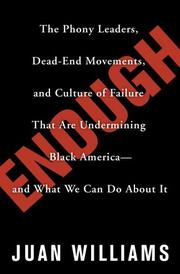 The Phony Leaders, Dead-End Movements, and Culture of Failure That Are Undermining Black America--and What We Can Do About It
by Juan Williams
BUY NOW FROM
AMAZON
BARNES & NOBLE
GET WEEKLY BOOK RECOMMENDATIONS:

Black America is being undermined by a depraved popular culture, avers Williams (Eyes on the Prize, 1987, etc.), while its leaders pursue anachronistic, self-serving causes.

At a 2004 gala to commemorate the 50th anniversary of Brown v. Board of Education, Bill Cosby gave a blistering speech that deplored the black establishment’s indifference to the cultural pathologies crippling poor neighborhoods. Cosby was criticized for his remarks, but his thesis is defended here by NPR senior correspondent and Fox News commentator Williams. While taking care not to dismiss the reality of racism in American society, the author echoes Cosby in rejecting racism as an explanation for high levels of out-of-wedlock births, neighborhoods paralyzed by crime and deficiencies in education. The last particularly incenses the author: Brown was about getting access to a decent education, but a substantial number of poor African-Americans, he says, disdain to use that access. Williams assigns part of the blame to nihilism fostered by a thuggish, misogynist music industry. That industry would not be so successful, however, if the black establishment had not abdicated its responsibility to foster healthy cultural norms. Instead, noted African-American leaders occupy their time with projects that are not easily distinguishable from protection rackets (Williams condemns demands for slavery reparations) or in seeking further subsidies for the black middle class. Some African-American politicians, he concludes, rely on a pool of reliably poor people in whose name they can extract endless public funds for programs that they and their cohorts can administer. Williams has particularly harsh words for the maladministration and patronage politics of mayors Sharpe James of Newark and Marion Barry of Washington, D.C. There is also a hair-raising case study of the effort by such notables as Jesse Jackson and Maxine Waters to squelch criticism of poor care at the largely African-American–staffed King/Drew Hospital in Los Angeles. In the author’s view, part of the solution would be simply to hold major black institutions to ordinary levels of managerial probity. The greater need is for a culture that promotes the discipline and enterprise that characterized black society at the time of the Brown decision.

A formidable polemic: You may reject the conclusion, but you cannot dismiss the argument.

WHAT THE HELL DO YOU HAVE TO LOSE?
by Juan Williams
Nonfiction

WE THE PEOPLE
by Juan Williams
Nonfiction